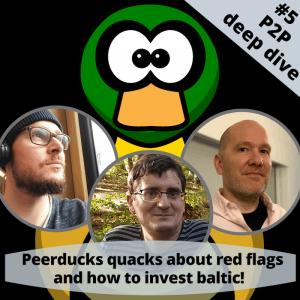 Dirk, Philipp and I talk about the dark side of P2P investments in the „deep dive“ podcast. Normally in German, but this time we have a special guest from the Baltic States with us so we had to do this in English. Mr. Peerduck is well known to many as the one who started to keep a watchful eye on the Baltic P2P platforms. As we know by know many of them turned out as scam.
Of course, we talk about warning signs and red flags and how he sees the P2P credit market. But he will also tell us how he invests his money and what he considers a good investment in the Baltic States.
If everything is true – who knows…

Enjoy the episode and the Shownotes:

In the deep dive podcast we have a special guest today, Mr. Peerduck. He will tell us a lot about red flags and entanglements of Baltic P2P platforms. And how he would invest his hard-earned money.
We don’t know if and how much of it is factual. Whether the duck or the platforms are telling the truth – no idea. Everyone has their own agenda, so please treat every statement with caution. No one knows exactly what is driving Peerduck. But the fact is that he set a lot of things in motion.
And it will be entertaining to you and worth thinking about.

In November 2019 the Roasted Peerduck appeared on Twitter with a cheerful „Hello world“. Pretty quickly, however, it was clear in which direction he wanted to go and to whom he wanted to spread bad news, even if no one took him serious at the beginning. His motivation remained in the dark. Meanwhile, his Twitter account was disabled and there were allegedly even threats against him. But in the meantime the duck is back on twitter and telegram!
And today, for the first time ever, he’s personally on our podcast!

Agenda of the podcast

Yes we had an agenda!

And we even dealt with some of the points – some rather less. The order also varied and we were unable to go into all the topics in depth as we wanted. The duck preferred not to talk about everything either, as expected.

Our planned agenda was:

The Baltic Horizon Fund (A2AMJK). As it stands, you can only trade it on the NASDAQ Baltic.

An order there could go with captrader for example. They list the opening times of the stock exchange on their pages – but I haven’t asked – it’s not really an investment for me, I’d rather take a US REIT instead.

As mentioned at the beginning – make your own thoughts and evaluate the statements before you take action from them.

Thanks for listening. I hope you enjoyed the episode!

Recommend us and write Apple Reviews
Don’t forget to subscribe to the podcast on Spotify & Co.

We do not make any investment advice here or give any recommendation for any products or platforms. This is our personal view and opinion! Don’t be a lame duck, think for yourself.
And remember none of the statements have been verified by us. We cannot give any guarantees or warranties as to the accuracy of the claims made.